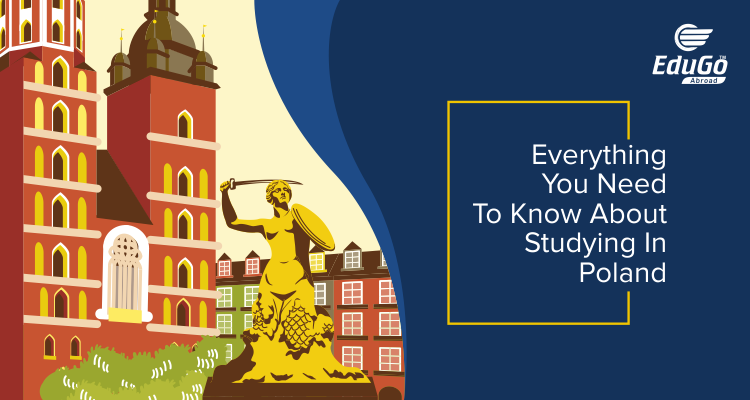 Everything You Need To Know About Studying In Poland

Poland is situated in Central Europe, bordered on the west by Germany. In the north by Baltic Sea, in the north-east by Russia and Lithuania, in the east by Belarus and Ukraine, and in the south by Slovakia and Czech Republic.

The climate can be as diverse as the landscape, from 30°C in the summer to -6°C in the winter in some regions. This country is having almost 38 million of population. And 1.9 million students are there from worldwide.

The word ‘Poland’ might bring to mind cold weather, or perhaps cold cuts of meat. But for increasing numbers of people, Poland has become an attractive, affordable option for studying abroad specially for Indian students.

Poland’s history of academic started from somewhere around in middle of the 14th century, when King Casimir the Great established Cracow Academy, which is today known as the Jagiellonian University which was world’s first state ministry for education. And after almost two centuries later Jesuit College for Vilnius got transferred into the Vilnius Academy.

So by the end of 17th century, the Poland and Lithuania Kingdoms had 3 major universities providing academic education to the national student’s as well international ones.

Polish university tuition fees are considerably lower than other study destinations, Fees are rarely more than 2800 EURO per annum, bigger saving in comparing with other European countries.

Polish people take higher education seriously and sincerely, so students in Poland often have full time tables and have to work harder. Over there in Poland, universities offer more than one subject, so that student will get specialization in one area but simultaneously will be gaining general education, too.

Outside of the university, there is a student’s social life in Poland with night life and the things to do in its student’s cities. Students are provided with the accommodation facility by the university but they can opt for their private apartments, too.

Applicants to study in Poland need to ensure they meet the entry requirements for each course (like management, IT, Engineering, Pharmacy, Nursing, Graphics, Multimedia, etc.) they’d like to apply to… The easiest way to apply for a polish Universities for higher education is to consult any affirm foreign educational consultant in the country.

Leading foreign educational consultant is professionally equipped to guide a student through the correct procedure also they ensure the student starts his study in Poland well on time.

Edugo Abroad is one of the pioneers of Study in Poland in India & is the Indian official recruiting partner with many leading Polish Universities. The complete application process on an average takes not more than 45 working days.

In Poland the post study progression route is very student friendly, as a student if you wish to stay there even after completion of your graduation you are allowed to get your ‘Stay Card’ gets extended.

And if anyone is interested in Science and Technology there is good news for you guys, because companies like Microsoft, Intel, GlaxoSmithKline and Google are setting up their bases in Poland.

So these were the things you need to know for studying in Poland. I hope you enjoyed reading this post. For the better counseling and guidance regarding career decision in Poland, you can visit <>a href="https://www.edugoabroad.com/">Edugo Abroad.